About Us > Our History

Pella Engraving Company started as an engraving shop for local newspaper the Pella Chronicle. In 1934, we became an independent company, building a reputation as an excellent provider of letterpress printing dies, which were an integral part of the printing process. Eventually, PEC expanded the business to serve the prepress needs of numerous papers and news agencies around Iowa.

In the late 1930s, Ed Dupree and Duco Zylstra, who had both worked for the Pella Chronicle before leaving to serve in World War II, joined Pella Engraving Company. After running the company together for several years, they invited another Pella Chronicle alum, John Vroom, to become a partner.

The decades after World War II were a time of great change in many industries. New technologies in printing led to the expansion of PEC’s services. In the 1960s, we began providing for other aspects of the prepress trade, including preparing color separations, stripping together ads, and making negatives.

In 1976, Bruce Van Wyk joined the team. Eight years later, John’s son Jeff also came onboard. By this time, Ed and Duco were transitioning leadership of the company solely to John. He soon recognized that Bruce and Jeff shared his commitment to quality and drive to serve customer needs. By 1990, the three men had formed a new partnership to lead PEC. 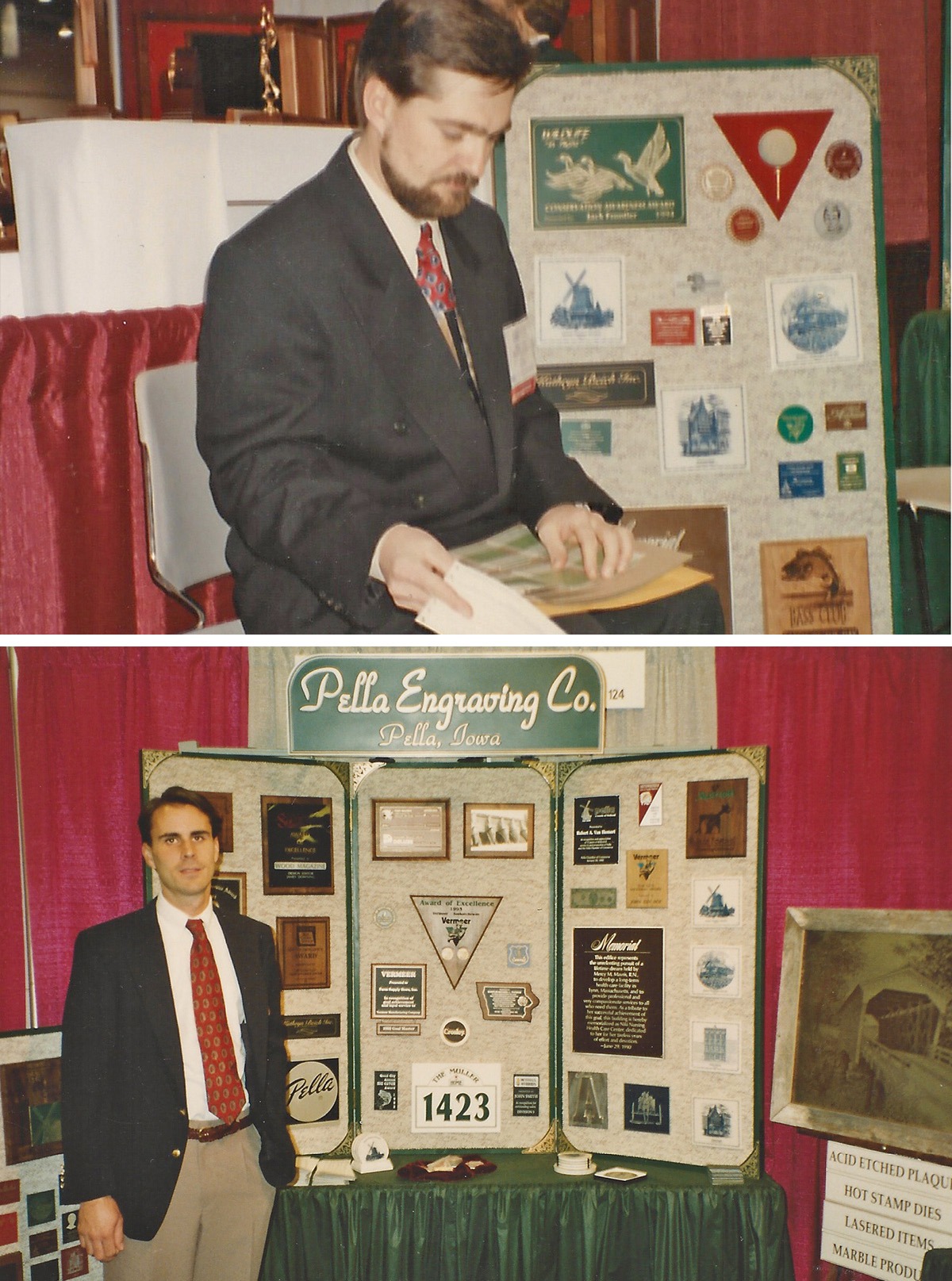 With the dawn of offset printing, many of the services once outsourced to PEC could be done in-house. So in the 1990s, Pella Engraving Company took the processes we knew well a step further. We added the machines and capabilities necessary to apply a finish coat—including a top-of-the-line paint booth and sanding equipment—and plaques, awards, nameplates, serial and ID tags, and signage became part of our product lineup. As the business evolved, more space was needed. In 1998, PEC relocated to its current facility on Washington Street. Twenty years later, the business grew again when PEC acquired Sadler Sign & Design—a Pella-based one-stop-shop for signage design, printing, and installation. Soon after, we started doing business under the name Pella Engraving & Sign Company.

Through all the change, one of our core capabilities remains constant. PEC is still one of the few engravers in the U.S. capable of making letterpress dies, hot stamping dies, embossing and debossing dies, thermal dies, casting patterns, leather stamping dies, and graphic overlay dies—the products that started it all.

We Still Make It Right

Bruce and Jeff continue to lead the company today. They welcomed Cory Vande Kieft and Jarid Purvis to the leadership team in 2016 and 2017 respectively. Jarid joined PEC in 2005 as a lead artist. Cory came onboard in 2011 as an etcher; he eventually settled into painting, finishing, and Metalphoto® work. Now, Jarid guides the artwork team, leads technical support, and works with Jeff to steer the new signage division. Cory, who has a marketing background, focuses on that business need and is involved with product development and overall management of the facility.

Today, Pella Engraving & Sign Company is one of only 150 engravers in the U.S. and has created nearly 150 signs for businesses in the Pella area alone. The company that once met the needs of a local market now has customers across the country and around the world. 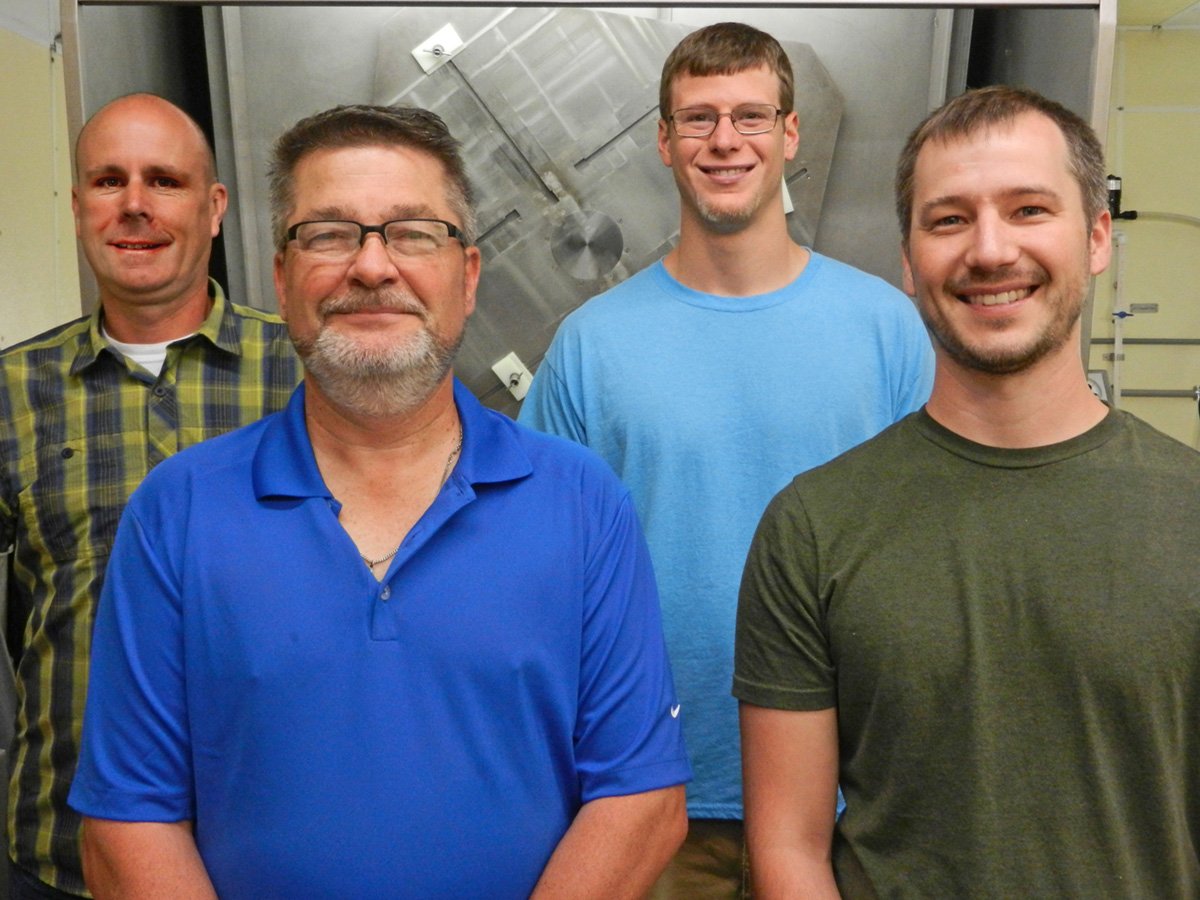 “Commitment to customers and quality are two principles we’ve inherited from Ed and Duco, and they are two things that will never change.”