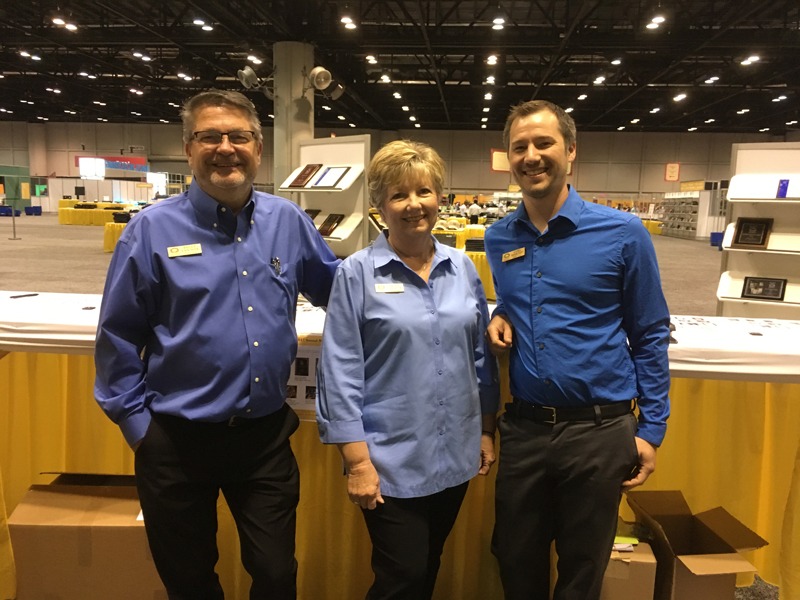 Bruce cherished his trips to the Million Dollar Round Table (MDRT) annual meeting. The people he connected with there often became valued friends.

After 45 years on the job, PEC Co-Owner Bruce Van Wyk is hanging up his hat at the end of 2020. During his tenure with Pella Engraving & Sign Company, Bruce helped steer the company through significant changes in the industry, pivoting the business more than once to ensure its long-term success. 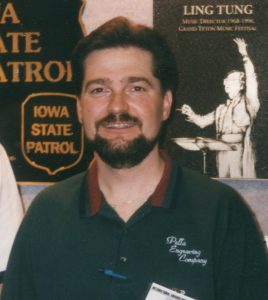 Bruce in 1987 at the International Sign Show in Las Vegas.

Bruce joined the PEC team in 1976, two weeks before graduating from high school. He started his career as a PEC artist, then moved into shipping, invoicing, and quoting. When owner John Vroom was ready to retire, Bruce and John’s son, Jeff, became equal co-owners of the growing company.

“I have fond memories of my father, Bruce, and I going to lunch once a week to strategize business plans,” shared Jeff. “My father viewed Bruce as another son.”

Some of Bruce’s most fulfilling PEC moments came early in his career. “I traveled to St. Paul to meet with a large check-printing company about taking on their letterpress work, and we got the job. It was supposed to be short term; they planned to move to a new process,” said Bruce. “They were very up front about that and reminded me to manage accordingly. They ended up sticking with us for 10 years or so. The revenue from that account allowed us to expand many other areas of the business that we would never have had the cash flow to do otherwise.”

Over the years, Bruce and Jeff have steadily maneuvered PEC’s services and production capabilities. First was a transition from letterpress printing to offset printing. By the 1990s, many PEC customers were moving offset printing in-house, so PEC added the equipment necessary to break into the plaque-making and awards market. As more than 400 engraving companies around the country shut down, PEC pushed forward. “That move probably saved the company in the long run,” reflected Bruce.

“Seeing the business weather the storm” is one of Bruce’s biggest satisfactions as he reflects on his career. And those past challenges are not unlike what Bruce sees happening today. “We are fortunate this year. We’ve been able to keep our doors open, but many around us have not.” 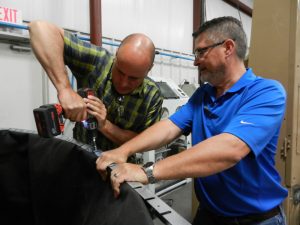 Bruce and Jeff have always been hands-on owners. In 2017, they added a waste-water handling tank to the facility.

Bruce will not step away from PEC completely in December; he plans to stick around for a few years in a consulting role. So it’s fitting he still has his eyes on PEC’s future. “I see the potential for phenomenal growth on the horizon. Adding the signage business has been a great fit for us, and it continues to provide opportunities.”

More travel to see their children is also in the cards, as soon as the pandemic circumstances allow. Between them, Bruce and Trudy have two kids, nine grandchildren, and four great-grandchildren.

Creating the family-like culture PEC is known for might be what Bruce takes the most pride in as he prepares to retire. “I’ll miss the day-to-day work with Jeff, who is like a brother to me, and Jarid and Cory have become like sons. Family first has always been the motto at PEC.” 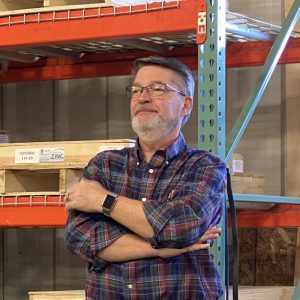 Bruce speaks to the PEC team at his retirement party.

Ronda Pope, who has been with PEC for 31 years, remembers when her son was in a third-grade play and she was reluctant to ask for time off work. Finally, Bruce came to her and said, “Ronda, your kids are only young once.” She went to the play.

“We’ve got several employees who’ve been with us for 20 or 30 years. Seeing them raise their families has meant so much to me. And watching them grow and reach their potential has also been so rewarding,” said Bruce.

Impersonations aside, Bruce’s efforts over the years have more than prepared the team to continue to build upon the company’s caring culture and traditions of exceptional customer service. Congratulations on a successful career, Bruce!

More on Bruce’s Impact from the PEC Co-Owners

“Bruce has always had a God-fearing heart, and it reflects in our business. We are going to miss him, but he’s worked hard all his life. Now it’s time for Bruce to enjoy some free time. We wish him all the best!” – Jeff Vroom

“Bruce has always made himself available to listen to any issues or questions, both work-related and about life in general. He has always shown he truly cares about what’s happening in the lives of all PEC customers and employees. His knowledge and work ethic will be missed, but more than that I will miss having him as a daily part of our work family.” – Cory Vande Kieft

“Bruce is a major role model in my life. He always has a positive outlook on negative or worrisome situations. I’ve always admired that and felt like I could go to him for advice on work or life. He is also a very hard worker. When he sets his mind on getting something done, he will absolutely finish the job. I’ll definitely miss Bruce around the shop, but I am really excited for him to hit the finish line on this chapter of his life.” – Jarid Purvis