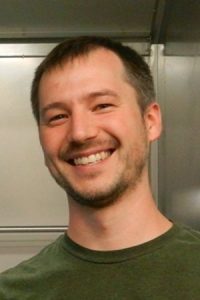 As produce manager at the Oskaloosa Fareway, Cory Vande Kieft enjoyed leading his own area. He was responsible for inventory and ordering, and he had some price-setting control. “I liked the pace of the job, but I could not see the hours fitting into my goals for my family life,” he said.

In December 2011, Cory joined Pella Engraving Company. “I was originally supposed to take over etching for Darrell Goodyk because he planned to retire,” said Cory. But six years later, Darrell is still at the helm of the etcher, so Cory found a niche elsewhere.

“I became the rover. I floated from station to station in the shop—the zinc etcher, paint setup and prep, finishing plates and dies.” Eventually, Cory settled into painting and finishing, a department where another team member was transitioning from full to part time. He also became the primary backup for the Metalphoto® department and serial and ID tags.

His job at PEC isn’t what he thought he’d be doing with a B.S. in art and a minor in advertising from Iowa State. “I once planned to go into higher ed, get a master’s, and teach,” Cory said. “I love my job at PEC because I get to do the kind of mentoring and teaching that attracted me to that field, but without the red tape you might encounter in a university environment.”

Cory is very production-minded. He prides himself on knowing each process inside and out. When majority owners Bruce and Jeff approached Cory about the opportunity to buy in, he didn’t hesitate. “I absolutely knew the answer was yes. I want a career that is challenging, and I love that no day is the same.”

As his leadership role develops, Cory sees himself being very involved with marketing and product development, as well as overall management of the facility.

With an almost three-year-old son, Micah, Cory finds he has a lot less time for hobbies than he used to. But when he can squeeze something in, he enjoys reading, creating ceramics, and playing guitar. He and his wife, Abbi, enjoy taking walks with Micah and their dog on the bike paths that surround Pella.