Signs First in Jackson, Tennessee, owned by John Nelson and his brother, specializes in producing digital and vinyl signage. They create vehicle wraps, interior architectural signage, window lettering, truck lettering—almost anything but lighted signs. Signs First is located in a city with growing industry, which leads to lots of business. Diverse businesses, however, mean they often get unusual signage requests.

Because Signs First tries to fulfill any requests its customers make, John often needs to find partner companies that have other skill sets. “When outsourcing, I work hard to find companies that have the same way of doing business. When you tell a customer you can make something happen by a certain time, you make that happen. I want to work with people who are as concerned about customers as we are.”

In this sense, PEC is a great match for Signs First. The two companies have been working together for seven or eight years, largely on plaque projects. On their most recent collaboration, according to John, “PEC shined big time.” First Bank needed 23 plaques for a new corporate office in historic downtown Nashville, and called Signs First. John then turned to PEC. The plaques were to be 1/4″ thick magnesium featuring cut metal letters with a silver finish on a black textured background.

The job had tight deadlines and an extensive approval process, but John never had to worry that everything would get done on time. “At one point, we learned one of the most important signs in the job, the plaque in the reception area, was needed a week early. I called PEC and asked if they could overnight it,” said John. “Once they assured me it would happen, I went home and slept like a baby. I knew if they said it would happen, it would.”

Though John primarily communicates with Bruce Van Wyk (PEC co-owner) and Janeen Eastwood (customer service representative), he said what makes PEC unique is the work ethic of the entire crew. “What they’ve done with the entire organization, from top to bottom, is amazing.” 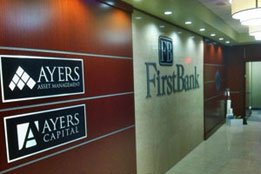 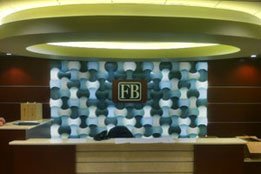