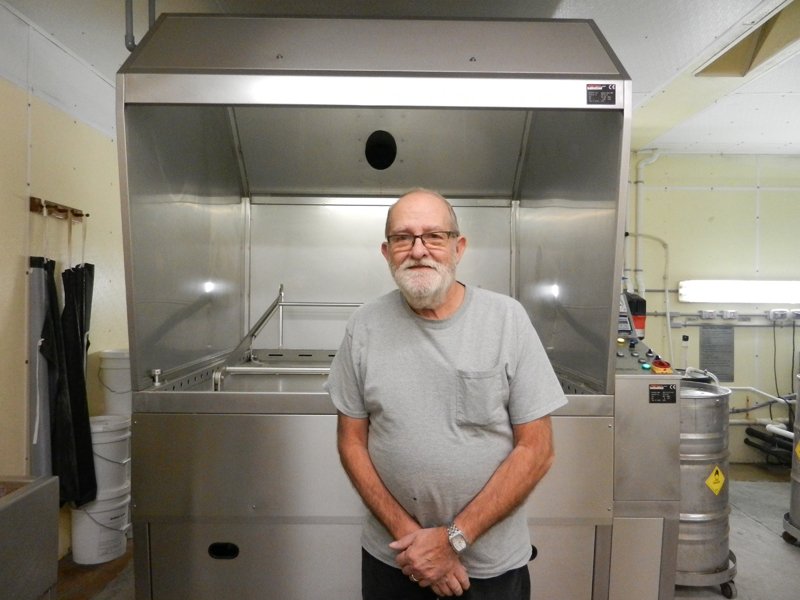 Darrell poses in front of one of PEC’s etching machines. He has been leading etching projects at Pella Engraving since 1969.

At the end of the year, Pella Engraving Company will bid a fond farewell to lead etcher Darrell Goodyk, who is retiring after working with the PEC team for nearly half a century.

“It’s been a great 48 years,” said Darrell. “I wouldn’t want to work anywhere else.”

Darrell joined Pella Engraving in 1969 after a surprise job offer from then-owner John Vroom. John had been looking to hire someone with the skills to manage etching projects. At the time, Darrell was working in the woodshop of another manufacturing company; his name was given to John with the assurance he had a strong work ethic and was willing to learn new skills.

So John drove up to Darrell’s house one day, knocked on the front door, and asked if he would be interested in coming to work for Pella Engraving Company. Darrell—who had never met John, never heard of Pella Engraving, and knew nothing about etching—agreed to stop by PEC to learn more about the position.

“I came to the office and spent the day looking things over,” remembered Darrell. “I thought to myself, ‘This doesn’t look too bad!’ So I decided to take the job and learn how to etch.”

And the rest, as they say, is history.

A lot has changed since 1969. When Darrell first came onboard, PEC was still at its original downtown location. The etchers mostly produced halftones and ads for small newspapers in the area. Today, the PEC facility is in the Pella business park. The advancement of digital printing means the etchers now specialize in projects like wrestling belts, plaques, and hot stamping dyes. New technology has been introduced into the workshop, including state-of-the-art zinc and magnesium etchers shipped in from Siegburg, Germany.

But one important thing has remained the same.

“The atmosphere has always been great,” said Darrell. “Everyone gets along really well. And the owners do a lot to keep up on all the latest equipment.”

The feeling is mutual. PEC’s ownership team feels lucky to have had someone as talented and hardworking as Darrell onboard for so many years. “Darrell has consistently provided quality engravings to our clients. In our minds, he is one of the leading etchers in the country,” said Owner Bruce Van Wyk. “We doubt anyone has etched as long as Darrell, or has the knowledge he has gained over his many years at Pella Engraving Company.”

Over the past several months, Darrell has spent time passing on that knowledge by personally training his replacement. Darrell is confident he’s leaving the etchers in good hands.

Once his retirement becomes official, Darrell is looking forward to spending time traveling, including visiting his son in Georgia.

“We are grateful for Darrell’s dedication to Pella Engraving and our clients, but most of all we are grateful for his friendship,” said Bruce. “He will be truly missed—though he did say he plans on stopping in from time to time to join our breaks. Enjoy your retirement, Darrell! You deserve it.”