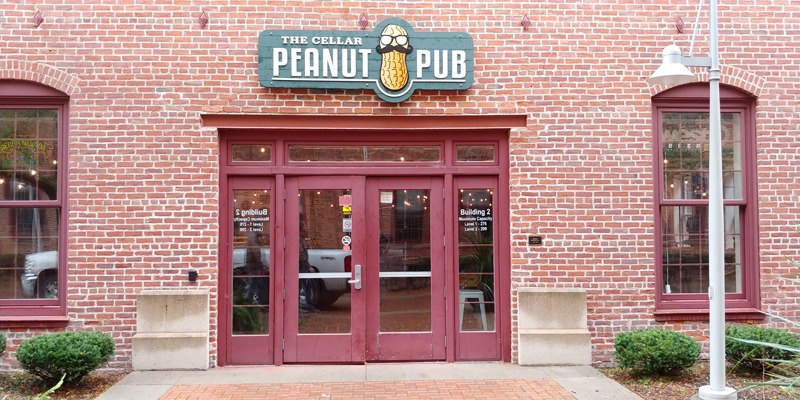 Since it’s 2015 move to Pella, The Cellar Peanut Pub has quickly become a favorite hangout for both townies and visitors. It’s almost impossible to imagine Franklin Street without this friendly neighborhood institution and its expert Pubtenders. Now, with a new location in nearby Newton, owner Marty Duffy and his wife, Betsy, are turning their attention to a new project: establishing the Peanut Pub brand.

“With the business growing, I really started to think about our branding,” said Betsy, who handles marketing the pub. “We needed a uniform logo and signage. Thankfully, I knew exactly who to turn to.”

Marty and Betsy reached out to Tim Sadler, head of the Sadler Sign & Design division of Pella Engraving Company. They needed two matching storefront signs featuring the new logo (for the Pella and Newton locations), as well as a double-sided hanging sign to be installed on the side of the Newton pub. A longtime Pella resident himself, Tim was glad to take on the project.

The new logo is a bespectacled and mustachioed peanut, which bears a striking resemblance to Marty. Tim partnered with its creator to design the signs. Then, he Photoshopped their proposed designs onto pictures of both Peanut Pub locations and showed them to Marty and Betsy.

“Tim made sure the plans for the signs followed all city ordinances,” said Betsy. “We were excited to see the finished product.” 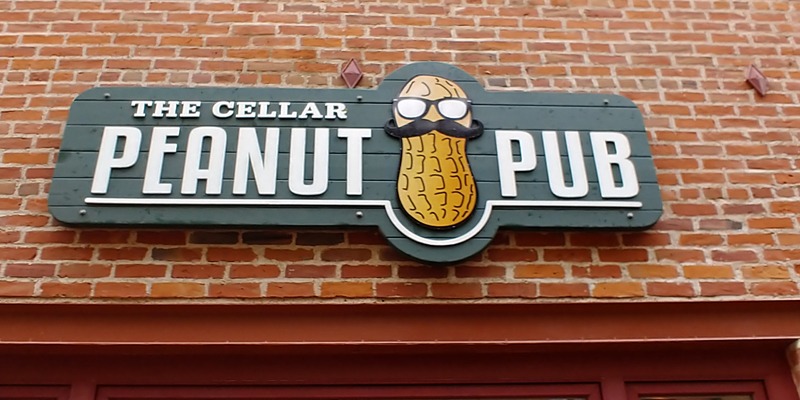 Fabrication started with cutting and assembling the wooden bases of each sign, which were then painted with three coats of solid color stain to make them dark green. Using the digital logo file, Tim’s team printed a full-color Peanut Pub logo for each sign on quarter-inch aluminum. The logos and sign lettering (also quarter-inch aluminum) were then cut out using the PEC plasma cutter and affixed to the wooden bases.

The Sadler Sign & Design team also handled installation and fabricated much of the mounting hardware for each sign. For example, Tim designed and made the ornamental bracket that holds the 4′ x 5′ hanging sign. He then built a scaffold, which allowed him to bolt the sign to the wall. The Sadler Sign & Design team was able to flush-mount the storefront sign in Newton by bolting into the building’s mortar; they used a canopy-mount system to install the sign at the Pella location.

“The work Tim and his team did on our signage is kind of like magic,” said Betsy. “I’m planning to start my own venture soon—a brewery. When that gets off the ground, I won’t go to anyone else for my signage.”