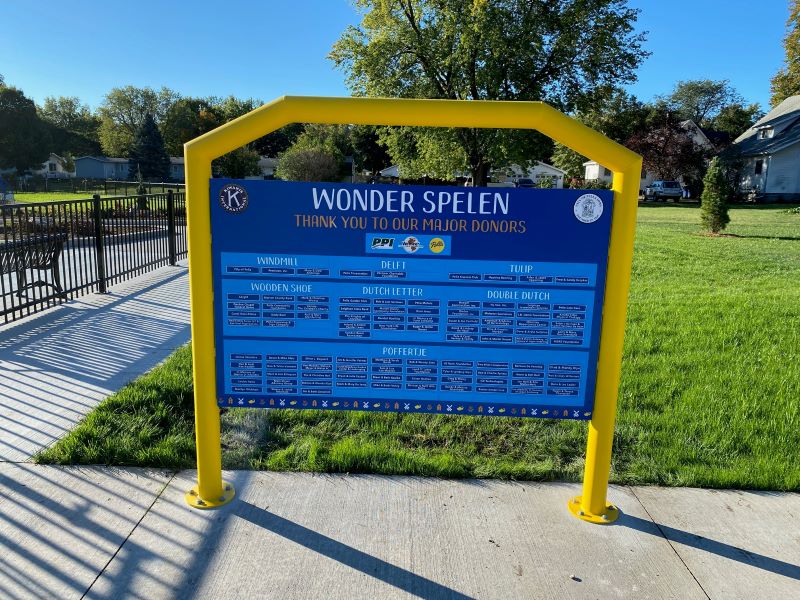 In 2019, Fred Kreykes came to a meeting of the Pella Kiwanis Club with an idea: transforming the Kiwanis Park on Main Street into an accessible, inclusive place where people of all ages and abilities could play. He was met with overwhelming support from both the Kiwanis and the City of Pella. Last October, the Wonder Spelen playground opened to the public, featuring interactive and sensory play equipment, as well as accessible bathrooms.

The project was in part funded by the proceeds from the Kiwanis poffertje stand, which the club rolls out at Tulip Time and other town events. It was also made possible by donations from several businesses and individuals, whose generosity the Wonder Spelen team wanted to honor with a recognition wall.

“In 2010, Pella Engraving & Sign Company did my company’s sign. Over 10 years later, I knew they were the only people I wanted to work with on this donor recognition wall,” said Mark Wiskus, a Kiwanis member and chair of the Wonder Spelen project.

Mark and his team collaborated with PEC on the wall’s design. It was important to all involved that the design allow new donor names to be added in the future. And, of course, the wall needed to incorporate some nods to Pella’s Dutch heritage—after all, the crown jewel of the playground is a large windmill!

“PEC does a fantastic job of listening to what their customers want and asking questions about their vision,” said Mark. “We worked together to create a great design that had everything we wanted.”

The construction of the Wonder Spelen donor wall gave PEC the opportunity to flex a wide range of skills—from vinyl work to zinc etching and custom metal fabrication:

When the parts were complete, the PEC team put everything together and installed the wall at the playground. But that is not the end of the story.

“Now we’re working with Pella Engraving on a street sign for the Wonder Spelen,” said Mark. “We’re all excited to see it!”