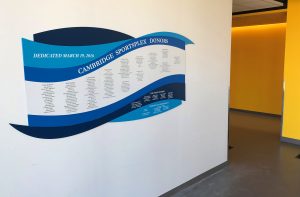 The donor wall at the Cambridge SportsPlex honors all those who contributed time and money to the project.

It took 140 donors to make it happen, but thanks to their dedication, the town of Fairfield, Iowa, has a new gym and pool facility that is improving its citizens’ quality of life and attracting new people to the community.

Originally built 45 years ago, Fairfield’s recreational facilities were due for an upgrade. In 2011, planning began for the multi-million-dollar Cambridge SportsPlex, and it opened in 2016. The 36,000 square-foot-space includes an indoor three-lane track, three full-size basketball courts, fitness area, exercise floor, storage, batting cages, restrooms, and showers.

After the grand opening, the SportsPlex task force committee wanted to recognize the generous donors who contributed to the project. A member of the task force, Kent Whitney, had previously worked with the PEC team and was pleased with the end result of the project. On behalf of the committee, he approached Pella Engraving Company about creating a donor recognition wall.

“I stopped in one day and showed them our ideas. They immediately took to it and got excited about the project. I knew right then we had the company we needed with the capability and passion to create our donor wall,” said Kent. 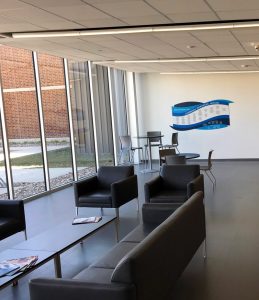 Kent already had a design in mind, and PEC was able to bring the idea to life using a three-part approach:

The donor wall was installed in the Cambridge SportsPlex lobby. It perfectly fills space on a bare wall and improves traffic flow through the building. The task force committee was very pleased with the final project.

“Pella Engraving Company made what could have been a very challenging project enjoyable and stress-free,” said Kent. “The team’s professionalism and friendly and flexible demeanor made us feel like our project was the most important one on their plate.”