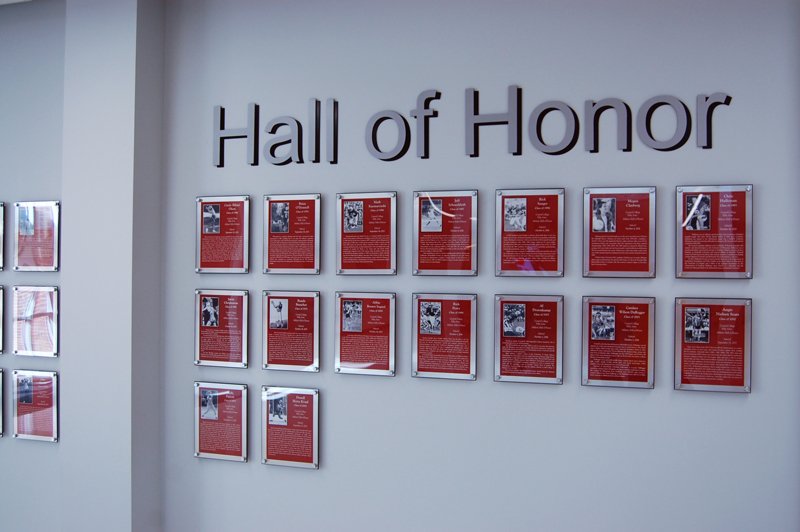 Pella Engraving manufactured 58 plaques for the updated Central College Hall of Honor—55 recreations of the original plaques and 3 all-new plaques.

Four years ago, Central College embarked on the Forever Dutch initiative—an ongoing multi-million dollar renovation project that is transforming the A.N. Kuyper Athletics Complex into a modern and welcoming home for student-athletes, coaches, and Central fans. The latest upgrade to the complex is the expansion and renovation of the southern and western wings of P.H. Kuyper Gymnasium.

The expansion was completed last spring, but it was officially unveiled to fans, donors, and alumni at the Athletics Hall of Honor induction ceremony on September 23 during Central’s 2017 homecoming celebrations. Open for exploring on the gym’s second floor were areas like the newly updated wrestling room. Downstairs, in the Pacha Family Lobby, guests were greeted by something special courtesy of Pella Engraving Company—a brand-new Hall of Honor recognition wall.

The Hall of Honor was instituted in 2002. It recognizes standout student-athletes, coaches, and administrators who have become exceptional leaders outside the Central College athletics family. “Inductees to the Hall of Honor represent the best of what Central is all about,” said Athletics Director Eric Van Kley.

Fifteen years ago, the original Hall of Honor included 55 magnesium plaques with wood backings; Pella Engraving had been manufacturing a new plaque each time an inductee was chosen. As the work on Kuyper Gymnasium progressed, the Forever Dutch team decided to replace the original plaques with new ones that fit the sleek, modern feel of the renovated building. “We went back to Pella Engraving because we knew they could provide plaques with the style and excellence that characterize the new building,” said Eric. 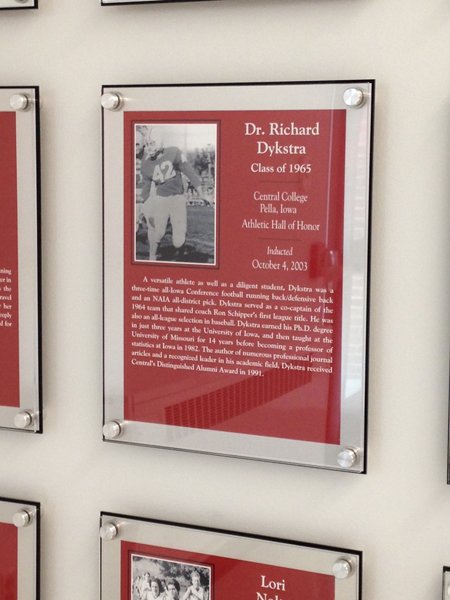 The new plaques feature a photo of the honoree, their graduation date, and biographical information printed on silver aluminum plates.

In total, Pella Engraving manufactured 58 plaques for the updated Hall of Honor—55 recreations of the original plaques and 3 all-new plaques. Plaques will be added each year as new individuals are inducted into the Hall of Honor. The PEC team took the lead in creating the new plaque style. Each plaque includes a photo of the honoree, their graduation date, and a short description of their accomplishments, all surrounded by a field of Central red. The photo, text, and color background were printed on silver aluminum plates with Pella Engraving’s UV flatbed printer. The aluminum plates were then adhered to a black acrylic backer. Finally, clear acrylic shields that provide both style and protection from nicks and scratches were secured to the front of each plaque with aluminum standoff caps.

The display is headlined with plasma-cut aluminum lettering. Two sets of letters—one silver and one black—were created using PEC’s state-of-the-art plasma cutter. The black letters were installed first, followed by the silver letters, which were placed at a slight offset to create a drop-shadow effect.

The new recognition wall received a very positive reception at the Athletics Hall of Honor ceremony. “I’ve heard a lot of people say that the new Hall of Honor looks very classy,” said Eric. “It adds excitement to the lobby, and the quality of the display is something we are really proud of. The Pella Engraving team is tremendous.”