“Our goal was to create something really meaningful for veterans,” said Dennis Leininger of Oakdale Pride, the community organization dedicated to preserving Adel’s historic Oakdale Cemetery. Over the past year, the group has focused on revitalizing Veterans Plaza, the area around the cemetery’s flag pole that is also the site of Adel’s annual Memorial Day ceremony. 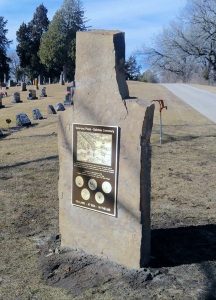 The monument is part of a larger renovation project centered around the flag pole area of Adel’s historic Oakdale Cemetery.

With funds for a new flag pole already donated by the American Legion, members of Oakdale Pride turned their energy towards building a monument to honor America’s veterans.

“We were looking for a firm we could trust to create the plaque for the monument,” said Dennis. After contacting seven firms, Oakdale Pride chose Pella Engraving Company. “We found Pella to be the most responsive, the most open, and the most confident they could complete the project the way we had envisioned it,” explained Dennis.

Oakdale Pride’s vision for the monument was simple on the surface: a door-sized limestone slab featuring a custom plaque. In addition to the seals of each branch of the U.S. Armed Forces, the plaque would feature an image of three soldiers, covered by a superimposed American flag.

Early on, Traci Thomas of Oakdale Pride teamed up with PEC’s Janeen Eastwood to come up with a plan for turning this vision into reality. PEC artist and etcher Jarid Purvis dedicated 22 hours to creating hand-drawn line art for the plaque based on the photo provided by Traci and her Oakdale Pride Colleagues. The project posed several unique challenges, not the least of which was recreating the semi-transparent American flag.

Jarid dedicated 22 hours to recreating by hand this photo provided by Oakdale Pride.

“We don’t get to do art like this very often,” said Jarid. “Janeen and I worked really closely with Traci and Oakdale Pride throughout the project, which was a real pleasure.”

Jarid and PEC Co-Owners Jeff Vroom and Cory Vande Kieft also participated in the installation of the plaque at Oakdale Cemetery.

“Pella was so committed to collaborating with us and seeing the installation through to the end, you would have thought revitalizing Veterans Plaza was their own project,” said Dennis.