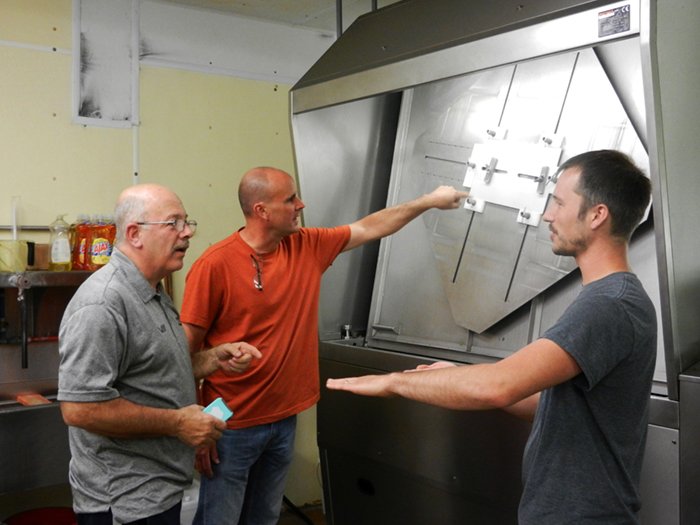 Jeff Vroom and Cory Vande Kieft show Jackie Gibbs of Slip Disc Ministries where his die plates are fastened so they can be acid-washed. The acid-wash process removes any excess material from the design and ensures that when the die is used on Slip Disc’s press, the final product is high quality.

For the Pella Engraving team, one of the most enjoyable parts of being in the engraving and printing die business is getting to know the customers who order their products.

“Our goal is to provide more than just the tools to do the work on,” said Jeff Vroom, Pella Engraving co-owner. “So many of our customers have unique stories, and when we understand what drives them and their businesses, we become a valuable partner—not just some nameless, faceless company they order printing dies from.”

“We consider many of our customers friends,” added Cory Vande Kieft, PEC co-owner. 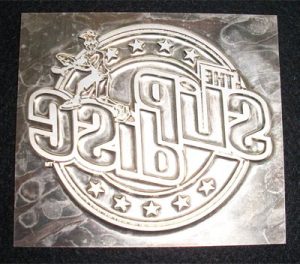 The Slip Disc logo on a foil stamping die.

Last month, the Pella Engraving team welcomed one of those friends, Slip Disc Ministries owner Jackie Gibbs, to its facility. Jackie’s company sends the word of God around the world on plastic flying discs ordered by churches and other Christian groups. Pella Engraving makes the foil stamping dies that allow Jackie to print his customers’ logos onto the front of their flying discs. One of Slip Disc’s five standard messages is typically printed on the back.

Jackie planned a special stop in Pella to see where his dies were made and to meet the people who make them. At the time, he was traveling from his home in Arkansas to Wisconsin to install a disc golf course, another service he offers through Innova® Disc Golf.

Already an avid disc golf player, Jackie started Slip Disc Ministries 26 years ago after being inspired while on a mission trip in South Padre, Mexico, with the youth group he led. “I watched kids hand out a homemade flyer with information about a rally our group was hosting. It got dropped and floated to the sand, and I thought to myself, ‘Why can’t the message fly?’ I ran what I thought was a silly idea by some of my kids, and they went crazy for it.”

Since then, Jackie’s company has sent discs to 75 countries. Some of his most memorable projects have involved sending untraceable discs stamped with messages of God’s love to undisclosed locations where Christians are persecuted. The Duggar family carried Slip Discs to El Salvador in 2011. Slip Disc shared a slide show from that trip on its Facebook page. 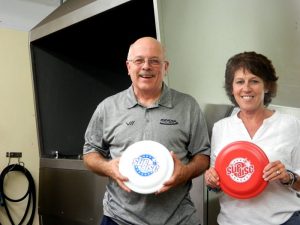 Ronda Pope handles Jackie’s artwork and transforms it into the necessary format to create his foil stamping dies. Most of Jackie’s orders are turned around within a day.

Slip Disc Ministries has been working with PEC for 10 years. “In Pella Engraving, we’ve found a kindred spirit, people that understand what we do,” said Jackie. He depends on PEC team member Ronda Pope to handle his customers’ artwork files—and to keep things lighthearted. “They’re very patient with me.”

“Jackie is so passionate about what he does,” said Jeff. “It’s impossible not to get just as enthused as he is about the work he is doing. Having him plan a stop to meet us on his trip was an honor.”