Lost to history? Not if we can help it. 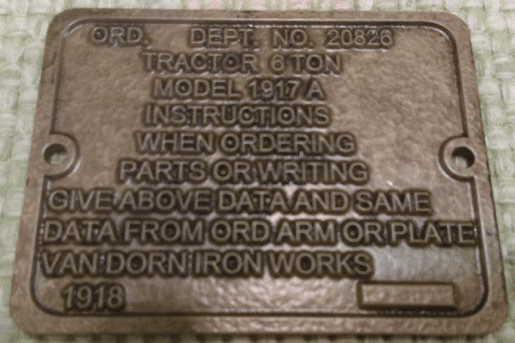 Pella Engraving recently had the privilege of contributing to the reconstruction of an important part of U.S. history—a Model 1917 (M1917) Renault tank. It was the United States’ first mass-produced tank, going into production right before the end of WWI. When peace arrived shortly thereafter, only 950 M1917s had made it off the production line. Today, few are still in existence.

The Indiana Military Museum’s collection of artifacts has long been missing an M1917. Because purchasing a real M1917 was impossible due to their rarity, the museum decided to construct a fully accurate reproduction. The project was dedicated to General George Patton, the famous military hero responsible for setting up the Tank Corps of the American Expeditionary Force in 1917.

For the construction, the museum turned to Hoosier Restoration and Movie Props, a company that recreates historical equipment for museums—“bringing back what history has lost,” as they put it. PEC helped out by creating the tank’s data tag out of zinc from specifications sent by Hoosier. Hoosier distressed and antiqued the tag so it would look its original age. 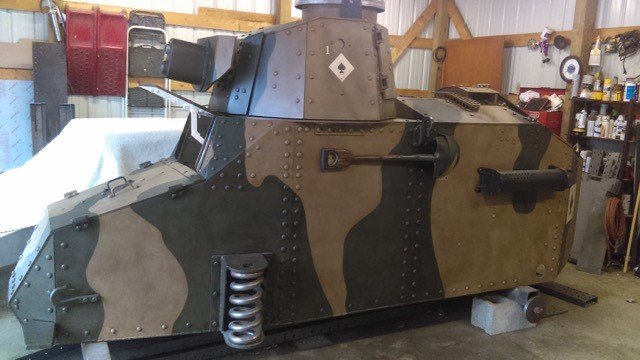 Randall Becht, who started Hoosier Restoration three years ago with his partners Brian Bartholome and Grant Becht, described the experience:

“When the Indiana Military Museum contracted us to do the world’s first 1:1 newly minted, fully functional M1917 tank, we were told how big of an honor this would be—a project dedicated to America’s most famous general and the world’s first recreated M1917. The reverse engineering required on this project was daunting. But after a couple of meetings with the museum, we decided to do it. The museum got us a one-time viewing of seven hours with one of the remaining M1917 tanks. Then they gave us detailed pictures of the inside and main armament. We have painstakingly reproduced everything from the functioning salute-firing main gun to the smallest details, like making 600 rivets. 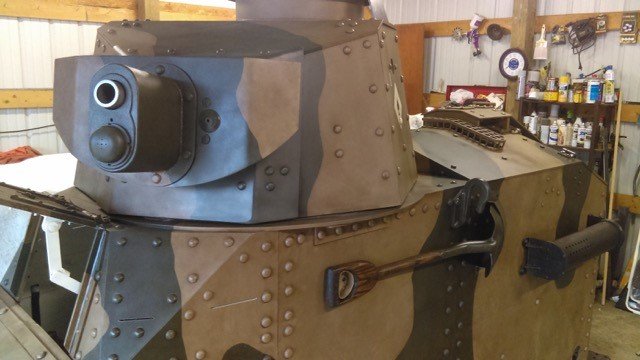 “The data tag was one of the hardest things to find, and after talking to six different vendors only Pella Engraving Company was up to the task. The data tag is on the outside rear of the tank, exposed for everyone to see. It had to be right. After viewing the craftsmanship of the copy of the original tag design created by Pella Engraving, we were very satisfied.

“This tank will be dedicated to General George Patton, and it flies his tank insignia. George Patton Waters will be on hand to dedicate this tank to his famous grandfather. To complete a tank and every part, just as it was in 1917, is an immense project. We have sponsors involved like Walbash Steel, Pella Engraving, Winchester, Industrial Filter Manufacturers, and Ohio Valley Ordnance, and the sponsorship list is growing. Hayes Otoupalik, a historian who also currently has a real M917, has been helping with original photographs. AMSCO, the original track manufacturer in 1918, is on board to reverse engineer the cast track pads.

“This tank will be on display and brought out for special occasions by the Indiana Military Museum. Judge Jim Osborne, the museum’s CEO, has been collecting military equipment since he was a young boy. He has dreamed of having one of these tanks. But the rarity of the WWI tanks makes finding and purchasing one completely impossible. Hoosier Restoration allows museums to recreate equipment from the past, and bring it to the public professionally and with reverence to past generations. Our company and its partners can recreate anything—whatever the mind can imagine. We are dedicated to making the museum experience the most realistic and best learning experience possible.”