Leadership of the future 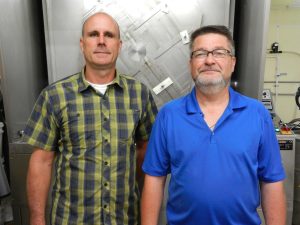 Jeff Vroom and Bruce Van Wyk, PEC majority owners, have always been focused on the future.

Pella Engraving Company may not technically be a family-owned business, but owners Jeff Vroom and Bruce Van Wyk have always been devoted to a leadership style that makes it feel like one. While neither plans to retire any time soon, both recognize the value of identifying natural leaders and mentoring them in the years leading up to owner retirement. After all, that’s how they were initiated into ownership.

Bruce and Jeff became full co-owners in 2000 after running the company alongside Jeff’s father, John, for 10 years. John had taken over from company founders Ed Dupree and Duco Zylstra, who started PEC in 1934. PEC’s long-view approach to developing its leaders has paid off. Jeff and Bruce have successfully navigated PEC through the decline of the letterpress and pre-press printing services—once the core of the business—and have successfully diversified the company, building it into a leading provider of engraving, awards, signage, and plaque-making services. 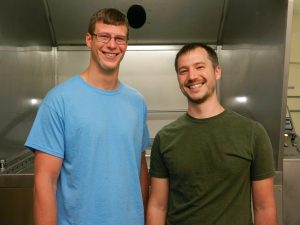 Now, PEC is preparing for the future again by welcoming Jarid Purvis and Cory Vande Kieft as minority owners. “In Cory and Jarid, we see parallels to ourselves,” said Bruce. Like Bruce, Jarid is an artist by trade. Similarly, Jeff and Cory both have a natural inclination toward production.

“They both have high ethical standards and a dedication to outstanding customer service,” Bruce continued. “And maybe most importantly, Jarid and Cory see beyond what is in front of their noses. They know that when they make decisions, they have to ask ‘Is what’s good for one person good for all 18 employees?’”

To give Jarid and Cory a chance to take the reins, Bruce and Jeff have begun spending Fridays away from the office. “We want them to have a chance to run the business, solve problems, and build relationships with our customers on their own,” said Jeff.

“It’s refreshing to have new blood. They’ll try new products and services, like we did. Some will work, and some won’t,” Jeff continued. “It’s that kind of willingness to take a risk, yet balance it with common sense, that is needed to be a business owner.” 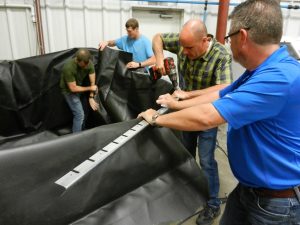 The four PEC owners work together on the zinc tank and many other day-to-day tasks.

Adding Jarid and Cory to the leadership team is the culmination of a dream for Jeff and Bruce. “We saw these qualities in them from the day they each started, and we’re confident that when we do retire, Pella Engraving will be in good hands,” said Jeff.

You can read more about Cory and Jarid in their PEC stories.